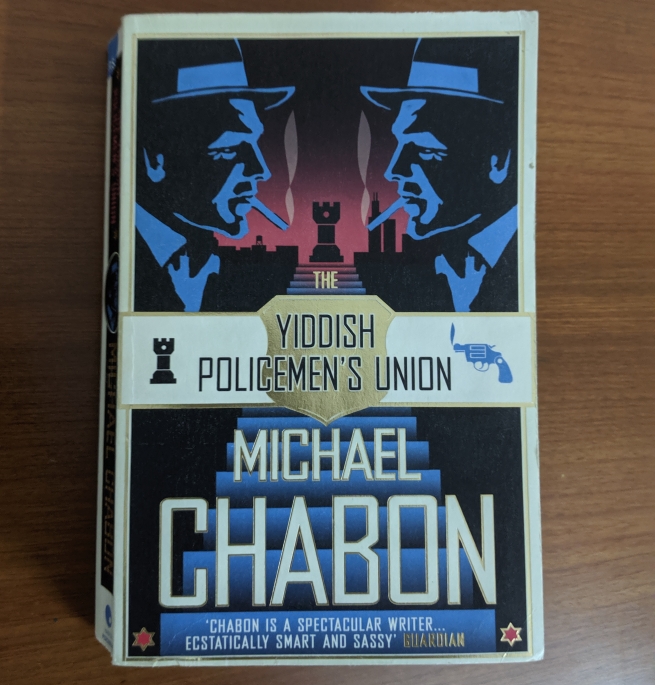 In the 1940s, the US Government approves a proposal to establish a settlement for European Refugees at Sitka – a seaside town in Alaska. These refugees, largely Jews fleeing the holocaust, establish a culturally and economically thriving settlement. In this fictional narrative, the state of Israel lasts but a few months in 1948 before it is overrun by Arab forces and destroyed completely. Thus Sitka becomes the focal point of Jewry, with members of various denominations packed tightly into that tiny town. Sixty years later, this territory is set to be handed back to the State of Alaska, throwing life in the frigid shtetl into flux.

Meyer Landsman, a highly respected homicide detective, is at rock bottom due to his failed marriage and consequent alcoholism. With two months to go before the Sitka Police Department is either integrated into the Alaskan administration or disbanded altogether, Landsman’s life gets more complicated when he begins to investigate the shooting death of his neighbour – a heroin-addicted chess prodigy.

Within the first three pages, The Yiddish Policemen’s Union rises miles above mere pulp fiction as a masterpiece that can be enjoyed at multiple levels. The book does well as a thrilling whodunit with a well-woven plot, sufficiently justifying the time you take with it. The more discerning reader has deeper themes to enjoy. Chabon has made up an intuitive Yiddish slang to correspond with life in the Film Noir shtetl. Common Yiddish terms appear matter-of-factly through the text, and the alternative meaning clicks in place effortlessly – instances are “sholem” for firearm (sholem = peace and firearm = piece / peacemaker) and “latke” for patrolman (potato pancakes vs patrolman’s peaked hat?). Yiddish phrases such as “A shvortz yor” and “Er zol kakn mit blit un mit ayter” appear in their English approximations throughout the book – a sort of a secret handshake to readers with exposure to the mame loshen.

Beyond the linguistic theme, there is the deeper exploration of Jewish identity. Landsman’s colleague and cousin – Berko Shemets – is the son of a Jewish father and a Tlingit mother. The implicit question of Berko’s Jewishness takes the reader on a tumultuous and thought provoking ride through his personal history; his view of his father; the Jewish-Tlingit conflict in the early days of Sitka; and the varied cultural interpretations of “Who is a Jew?”

Without weighing down the plot or flow, Chabon effortlessly integrates a succinct narration of the exhausting rigours of Chassidic observances and Judaism’s heretofore unfulfilled hopes of a messiah. There is also a riveting account of politics and power play within a Chassidic clan.

In short, Michael Chabon has crafted a pulp masterpiece that is entertaining, tragic, funny, and educational. There’s the ever-present spark of an indefatigable hope in a time of intense bewilderment. At the end of this book, whoever you are, you’ll empathize deeply with its characters and feel a little Jewish.

I'm a writer, investigator, researcher, and investor based in Gurgaon India. View all posts by Ajit Nathaniel